Everything I.T. came about mainly because I was just good at what I did, and all my friends and family kept telling me “you should be doing this for a living.” So one day, I decided to listen to them, and put it into action.

Like I said elsewhere, I have a varied past and work history. I am a USAF veteran, I troubleshot and fixed avionics (specifically electronic countermeasures systems, the most complicated systems) on F-15 fighters. When I got out, I went to work for Lockheed Martin (formerly just Lockheed Aircraft) and did a lot of the same stuff on C-130s …except we modified them into special operations planes. It was a blast. Until they lost the contract on the airport property and had to move to Paldale…and I don’t do hot weather, so I stayed behind. I came “home” to Ventura county. Little did I know there wasn’t aeronautical work here. I moved my skills into manufacturing, and found a few companies doing space projects…the mars rover launch ramp, the international space station, and others. But it didn’t pay. So I moved over to a company doing pyrotechnics (explosive devices with various applications) and I got into quality assurance there. Once I got into quality, I stuck around for a while, but like things eventually do when the economy changes, things slowed down. So I went back to school. I had wanted to for 30 years. Studied comptuer science at CSUCI. I was good at programming, but what I really loved was internet technologies. The first website I built was my own, of course. And it’s had 6 versions now, haha. It was hard to get those first jobs with not portfolio yet, but I did eventually, and once I got a few, things took off.

I’ve always been very good at making computers work. And there was more work in repairing computers, so I kept that on the job skills list, and the computer jobs inbetween the web jobs paid the bills. And I still do both. Although computers are much cheaper to just replace than they were when I started out. But there are still people that have Windows issues or need training, especially seniors I think, and I love tutoring/training and have a lot of patience. And I am extremely honest and ethical, so it was a good fit, and still is. I have a heart for people because there are so many criminals and scammers, and nothing makes me madder than to see a senior get taken for their little social security that then have. So I take care of who I can.

Yes, you could probably fix it, eventually. I know you aren’t dumb. But the time that it takes to learn what the issue is and how to fix it, is time you could be spending doing something more productive. Right? Besides, do you really want what it will do to your blood pressure?

Yes, there are a lot of computer repair people and companies, and a lot of web developers. But quite frankly, they are not all an honest bunch. Many people wind up on my doorstep (or telephone) recovering from a bad experience. That just won’t happen here. And no matter what, I will never lie to you. It’s just who I am. And it costs me nothing to be honest and tell the truth all the time. It really doesn’t.

Coming from a background of 25 years in military aviation, manufacturing and quality assurance, Quality is always my primary focus. You just can’t change who you are. A Favorite quote: “Don’t work for recognition, but do work worthy of recognition. “

Customer service is also an art many people don’t get. “I” get it. My very first job was a waitress job. I say that only to demonstrate that over the years from day 1, I have learned how to serve every client, even the difficult ones. I’ve been told I have undending patience. I suppose it’s true. It just doesn’t feel like I’m doing anything unique, serving others is literally part of my nature. My goal is make you feel like you are the only client, and to treat you honestly and with respect. I will listen, and be very patient. Whatever it is you need, we want you to get it “your way,” …I am here for you. My response times are usually among the best also.

Only the Highest Quality Work 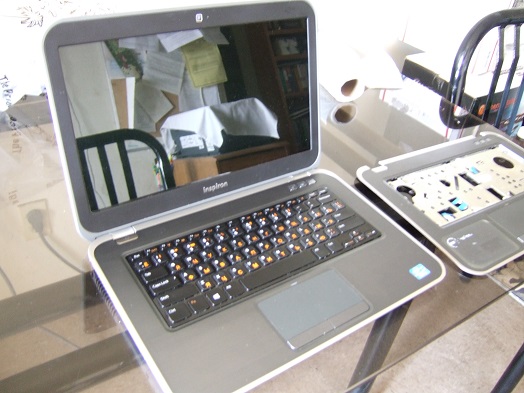 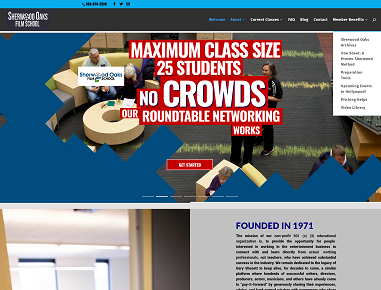 Other Reviews From Around the Internet 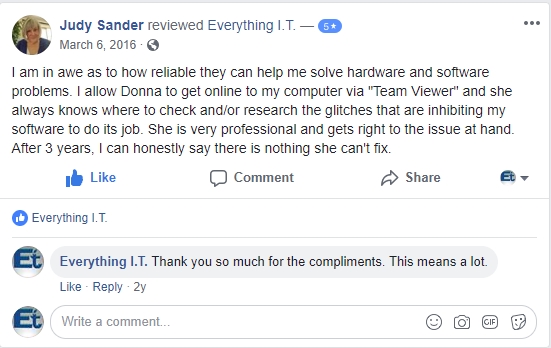 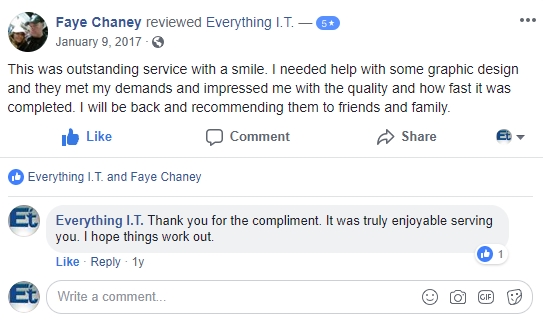 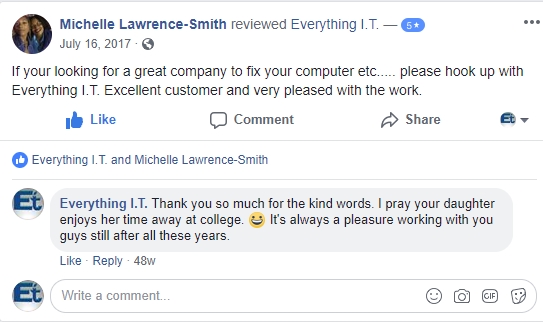 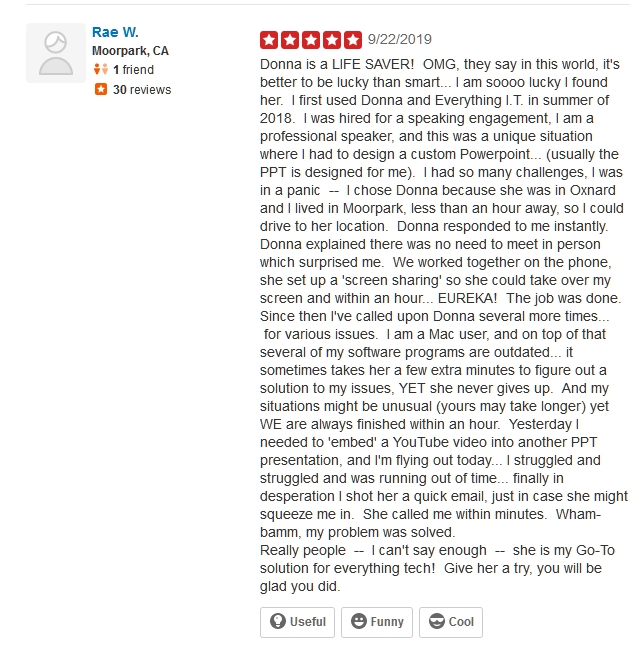 Write one there if you like, instead of here

Above are reviews from Facebook, LinkedIn, Yelp, and Alignable. (and no, I didn’t put only the positive ones and leave others out, all our reviews really are 5 stars…go check!) and a link to more reviews on Trustpilot. Feel free to read them all or even write your own anywhere. Below that, are the reviews submitted on our website. Read them also, or write your own anywhere you like.   🙂

I took my computer desk top to Donna of Everything IT and she fixed it within one day. I was surprised! She gave me a very reasonable quote. When I picked my cmptr up, she explained very simply to me what was wrong with it and how she fixed it. I appreciated it because I am not cmptr savy. She is a very kind, well mannered lady and I highly recommend her to anyone who needs fast computer repair.

Donna is extremely knowledgeable, and the level of communication and interaction is perfect! Highest quality for the money anywhere locally! 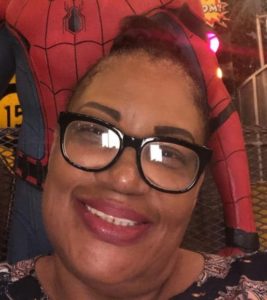 If you’re looking for a great company to fix your computer etc….. please hook up with Everything I.T. Excellent customer and very pleased with the work.

Submit Your Own Review Here On This Site

(only 2 fields are required, the rest are optional)

Schedule An Appointment
Or Get an Instant Quote

Get an Online Quote